Plucky 91-year-old Lois Griffiths never gave up hope when told she had aortic stenosis and there was no treatment available – due to her age, open heart surgery was not an option. 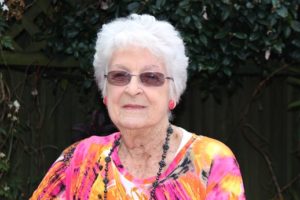 One of our first TAVI patientsAortic stenosis is the narrowing of the heart’s aortic valve opening, which prevents normal blood flow. It is most often caused by age-related calcification, but can be caused by a birth defect, rheumatic fever, or radiation therapy.
Despite the seriousness of her condition, as far as Lois was concerned, there were still things to do, places to go and people to see.

St Andrew’s was the first private hospital in Queensland to offer the procedure and Lois was the hospital’s first patient to have the TAVI procedure in July. Drs Incani and Poon have now performed six successful procedures at St Andrew’s.

Lois spent only two days in hospital after the TAVI procedure before being sent home to Clontarf where she could continue her various commitments including treasurer of the Clontarf Indoor Bowls Club, president of the Redcliffe Citizens Cultural Club and member of Legacy War Widows.

Fiercely independent and still living in her own home, Lois promised her family of six children, 17 grandchildren and 13 great-grandchildren that she would check in daily on Facebook so they knew she was okay.

“I come from a very close-knit family and it’s good to know they look out for me,” she said.

For patients like Lois, who have been diagnosed with aortic stenosis but are elderly or not well enough to have surgery, TAVI provides a better option.

Dr Poon has been involved in 50 TAVI procedures and he is delighted the technology is being offered at St Andrew’s.

“TAVI is perhaps the most transformative cardiac intervention in the past few decades with data now showing superiority over surgery in high risk patients,” Dr Poon said.

“More than 100,000 of these have been performed around the world and the technology has come a long way, with complications rate acceptably low.”

Dr Incani said the treatment aims to improve the quality and longevity of life for patients who would otherwise be deemed untreatable.

At St Andrew’s, a multidisciplinary team approach combining the expertise of interventional cardiologists, cardiothoracic surgeons, echocardiologists, intensivists, anaesthetists and geriatricians, decides on the best treatment and whether TAVI would be an option.

The procedure is carried out under anaesthetic and involves a small incision in the groin or chest. A new valve is folded up and slipped into a catheter – a thin flexible tube -which is then put into a blood vessel. When the catheter reaches the base of the aorta – the large blood vessel that carries blood from the heart to the rest of the body – a balloon is opened which inflates the valve. The old valve remains, pushed aside by the new.

General Manager of St Andrew’s Hospital, Andrew Barron, said the hospital has a long history of cardiac care and innovation and TAVI was a good example.

“We were the first private hospital in Queensland to carry out open heart surgery in 1985 and our commitment to provide the most advanced cardiac care to our patients continues today.

“Thirty years later, we are now the first private hospital in Queensland to offer TAVI which is a welcome addition to our services,” he said.

You can read more about our Heart Valve Team here.